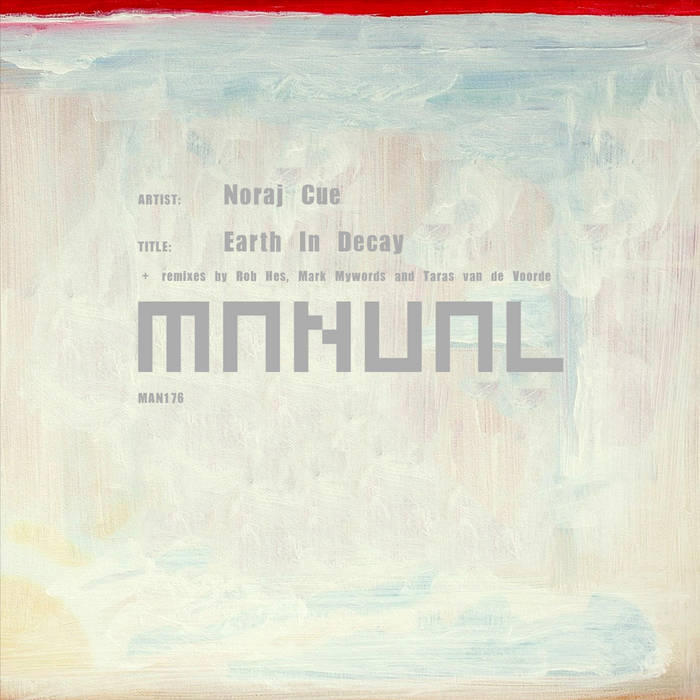 The 176th release on Manual Music finds the label showcasing the second single from Noraj Cue's critically acclaimed 'Kobalt' LP. Released in September of this year, the 15 track album saw the Dutch producer craft a border-less selection of music, which went down as his most creative and also best work to date. The LP's second track 'Earth In Decay' was a showcase of Noraj's precise craftsmanship, with its storyboard of unpredictable keys and minimalistic, yet bouncy design. Not only being a great listen but also one of the album's most contemporary dance floor selections, it makes for a perfect second single which is accompanied by remixes from Rob Hes, Mark Mywords and Taras van de Voorde.

The lone interpretation of 'Earth In Decay' is provided by Rob Hes who is returning to Manual Music for his fourth appearance. The Dutch artist famed for his productions on Bedrock, Herzblut and Tronic has carved out a unique place in the techno underground. Rob's uncanny knack for creating musical techno with boundless energy has earned him praise from Dubfire, John Digweed and Oliver Huntemann. A recent release on Pig & Dan's Elevate imprint proved to be some of Rob's most inspired work this year, and he's delivered an excellent rendition of 'Earth In Decay' to keep that strong momentum going. With a radically revamped groove and dynamic beats Rob has transformed the laid back, musical wonder into a fantastic dance floor journey. Reprocessed to perfection, the lead motif carries the rumbling groove and percussive waves on a wonky ride, all culminating with an exhilarating third act finale led by unpredictable modulation and splendid design.

The EP's second interpretation is provided by Mark Mywords who is returning to the label for his second appearance. The Dutch artist first appeared on Manual Music in 2011 with a contribution to the labels 'Manualism 5.0' compilation and also boasts releases on Consumed Records, Rawthentic and Tronic Music. For his 'Die Andere Zaal' interpretation Mark has remodelled Noraj's warped and druggy themes into a groovy, techno stomper. Anchored by mammoth beats and a warehouse-style groove Mark expertly incorporates the distinctive vocal elements, along with his own brand of acidic funk, the latter of which makes for a mind bending break, ultimately setting up what is sure to be a magical dance floor moment.

The EP's third interpretation is provided by Taras Van De Voorde who is making his sixth appearance on Manual Music. In addition to Manual the Dutch producer has found a home on Moodmusic, Noir Music, Saved Records and Suara where his timeless techno sound has flourished. His keen musical sense and attention to detail are rare in today's volume based production approach. It's these traits which have made him the perfect choice to remix one of the album's most critical pieces, it's closer 'Walk Back Home'. Beginning with seaside motifs, warm overlays and kaleidoscopic bass tones it's immediately compelling and deeply emotional. Poignant keys lead the piece into its second act where it's cavernous groove opens further, carving out more emotive qualities and ultimately a heartfelt conclusion.

The release concludes with the previously unreleased 'Extended Dub' of 'Stubborn To The Bone'. Sitting as the albums eighth selection it saw Noraj exploring the funk and soul inspired elements of his studio repertoire. It not only took the album in a new and inspiring direction but further solidified Noraj as an artist with a border-less mindset. The 'Extended Dub' brings the piece closer to more club floors with it's tougher sensibility and instrumental approach, all while retaining its romping, funk-laden flair. A timeless party anthem if ever there was one and a perfect conclusion to a release full of talent and variety from Manual Music. Don't miss it.